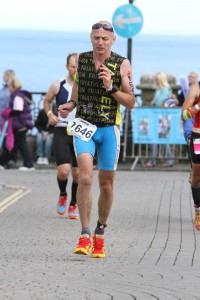 I have been a Level 3 British Triathlon Qualified coach since 2008 and coaching at Taff Ely Tri club since 2005. I took over from Club Coach and now Club President Phil Gibbon several years ago as Head Coach and have been very fortunate to have a brilliant coaching team and committee support to introduce some innovations. Amongst others things, I attended the SwimSmooth Coaching course on video analysis in 2011 and enjoy using the club’s HD underwater video camera and my own IPad/IPhone whenever possible to provide instant feedback to help adult triathletes develop their freestyle strokes. I have also attending the BTF Coaching Conference in Loughborough in recent years and a Running workshop in London. Coaching is a real passion and this club certainly keeps me busy most evenings!

My passion is seeing any triathlete fulfil their potential whether it is someone with a significant sporting pedigree or a complete novice who is exactly where I was back in 2000 when I first learned to swim freestyle and entered the Rhondda Cynon Taff triathlon, not quite coming last but was hooked. I was sailing, playing tennis and squash, and even managing a bit of climbing, but gave them all up to focus on Triathlon.

My favourite race has in the past been Blaenavon Triathlon, the longest continually run triathlon on the UK and one of the toughest. I completed it seven times. Brilliant scenery, tough hills on bike and run. Always lovely friendly people with a great atmosphere. This race has now moved to Abergavenny (now known as the Y Fenni/Blaenavon Triathlon). However, I now enjoy competing in Ironman Wales, which I have managed to complete all eight times it has run up to and including 2018, even managing a podium in the Old guys (M60-64 cat in 2018).

I suppose my most notable achievement as a competitor was the qualify at UK Exmoor  – Wimbleball 2016 (3rd place M55-59) to take part in the 2016 World Championships on the Sunshine coast, Australia at Mooloolaba in September 2016 – an experience I will certainly never forget. I have also managed a few  Super-Vet category wins, and was very pleased to come first in category and 21st overall in the inaugural Big Woody – Ironman distance event in the beautiful Forest of Dean in 2007. So far I have completed four IM70.3 and 15 full Iron distance races, including the first official full MDot at Sherborne in 2005, and again in 2006, all seven Ironman Wales races and four European IM championships on the fast Frankfurt course. 2017 was a big year in that I managed to complete full Ironman distance race Number 13 at Frankfurt in July 2017 (IM dot number 12) and Number 14 at Tenby in September 2017 alongside around 25 other Taff Ely Tri club members as well as winning my first Welsh Sprint Title in Vintage Vet category at the Tuska Triathlon. Qualifying at the Leeds ITU in 2018, I have now represented GB at Age-group in the European Championship 2019 in Weert, Holland, an experience I shall treasure always.