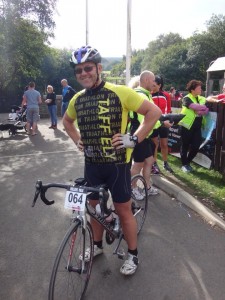 The first tri I took part in was the Cynon Valley Triathlon in 1998, and that was it I was hooked.
I attended the ASA assistant swim teacher’s course in 2000 and started helping Phil Gibbon with the swim coaching. I then attended the Welsh Triathlon Association (as it was then) Level 1 coaching course in Wrexham and was away coaching the three disciplines.
In 2001 I took part in the first official Ironman branded event in the UK, the “Bluesure HIMUK (Half Ironman UK) based around Llanberis, however due to the foot and mouth outbreak, the course was altered to finish in Caernarvon, at the foot of the castle walls. 1900 meteres of swimming, 56 miles cycling around the Snowdonia National Park and a half marathon alongside the Menai Straits, and all under six hours, fantastic.
I also took part in the 2002 event, but my mojo for Tri had started to disappear, and postings with the RAF and a liking for cooked breakfasts and cheap beer, led to a few fallow years in the racing calendar.
Around 2010 I started running again and slowly the tri bug got me again, later on I would again get the assistant coach title, this time with Ed Morgan.
Around this time the club had become a small nucleus of members, some just keeping fit and not many racing.
In 2011 at about 18 and a half stone (yes I have lost some!!!!!) I spectated at the first Ironman Wales event and thought… “why on earth aren’t you doing this?” I had been involved in tria
thlon a lot longer than some of the people I saw having a fantastic day and felt very envious.
That was it, I stopped the beer (which in civvy street was far more expensive than it had been in the NAAFI) and the bad food, shook off 3 stone of ugly fat (no I didn’t have my head cut off) and completed IMW in 2012. I enjoyed it so much that I entered again in 2013 and have entered for next year.
During this time some boys called Brownlee and some girl with a good Welsh name, Jenkins had been doing their stuff and surprisingly triathlon was starting to get really popular. As an aside, I had trained and competed with Helen Jenkins’ dad, another Ed in the RAF, who’d have thought eh!!
Sorry, back to it, Taff Ely Tri started to get busy and more and more people were making the transition (like it?) into triathlon and we needed more and better qualified coaches in the club to support Ed (Morgan not the other one!) so I completed my Level 2 with Welsh Triathlon and am now really enjoying being a club coach, and athlete.
My favourite event has to be Ironman Wales, the level of support on that day is enough to anaesthetise any pain you may have and the feeling of achievement is awesome.
I love coaching and love to see the beginners into triathlon make those first steps into enjoying the sport I have participated in over the last 15 years. I still really enjoy seeing the more accomplished athletes making gains and pushing the name of Taff Ely Tri to the fore as well!

Update – Tony Dally won BTF Coach of the Year and Welsh Triathlon Coach of Year for 2014!